Mess With the Bull

a bit more progress! i was nervous about doing that craterous foreground, so i did that first to get it out of the way and it seems like its come out alright! im now trying to think a little bit more ahead about what my process is going to be after i do this.

i went to home depot and got stuff to make the canvas im going to put this on! quick pic, hold on.. 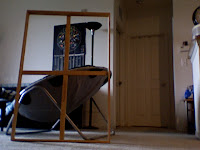 you cant really tell but the stretcher is 48"x32", so its fairly sizeable. romy even showed me how to interlock the crossbars, so it doesnt look so jankaty. then i was thinking, would it be easiest to silkscreen the entire thing onto the canvas? or would it be easier for me to paint out in solid colors each bute, then silkscreen the black lineage over it? or should i paint the solid shapes, then project my translation of the lines and trace them on and paint them? the second idea sounds like it would take a RIDICULOUSLY long time, but keep in mind that to silkscreen i would have to go through that process, which includes constructing a silkscreen thats big enough to cover all the surface area. it is, however, and EXACT science, and i looovveeeee hard crisp edges so. felicia said she would help me out in the labs so, thats exciting! anyone have any ideas for me, or know how prepainted surfaces react to silkscreen overtop?

in other news, i still have nothing for our gic project...i feel like my concepts are on the proverbial tip of my tongue, but i dont have the umph to sit down and draw anything out. later tonight! and digital video..welll....i dont even want to go there.
POSTED BY Lex Evans AT 5:22 PM

I was super impressed by that drawing and stretcher loverbeep! Seriously, that stretcher was so sturdy!!!