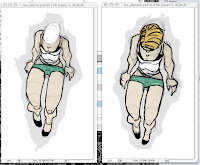 just a quick picture i did yesterday. i couldnt focus on anything homework related, so i poppd on marie antoinette and then the first 20 minutes of pride and prejudice and sketched away -- this was the only this that really came out though. the image on the left was the original, then after getting some feedback from pate as far as perspective, i edited it a bit to make the head way bigger than the feet. in general its still pretty stylized, and her hips dont really follow the same perspective as her shoulders but what can you do. im thinking about trying to do a painting of this, just flat color but on a big canvas; its a self portrait (woah im ripped sweet 8) )!

in other news, i cant get into my painting class. its just not going at a rate i can relate to, so im having a hard as hell time getting 'into' anything. i need to start drawing more though, ive definately fallen off that bandwagon.

ive gotten some really awesome feedback for the Illest of Ill site too! Im glad that the illustrators approve, since it's their show and i would have felt like a toolbag if nobody thought it 'encapsulated' it very well. Post it in your blogs to get the word around everyone, and if you're in sarasota make sure to stop by!

(ps - does anyone read this? im trying really hard to constantly have new stuff to look at, but no idea if anyone really reads anything :< )
POSTED BY Lex Evans AT 1:59 PM

haha, I read this, but that's because I stalk all my Ringling people online so it probably doesn't count ;)

yay im glad! thanks for commenting!