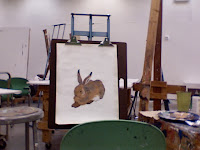 quick update with my first painting for the night; i have three to do for tomorrow, one is appropriating an image from a painter pre-1750, then adding a bg (above), then i have two landscapes to do. i think a trip to the woodshop is in order to see if anyone from my class is there, because im a little unsure about what is supposed to be different between the two. the way my painting class works is, we do homework assignments, then do more to them during class -- aka if you dont do your homework, youre SOL for class. since i spent last weekend on the illest site, i never managed to make it to the painting labs to do this rabbit/background painting, so i didnt go to class monday, and then thursday there was no class because we went to a stretcher workshop at the woodshop half the class, then had the other half off. either way, i know NOONE in my class, and am currently pretty in the dark, haha.

after this i have some reading to do, and then some work on our current gic project, which i suppose ill get more into at a later time.

oh! and illest was this weekend, and it was pretty good. its funny to walk through a show finally, and know about 80% of the people on the walls. exciting! im sure willie and adam are happy it's over though.

and on a quick sidenote, someone just came in and announced to me they were looking for things to take, laughing and saying its people's fault for leaving things out. and, i TOTALLY disagree with this train of thought. i mean, we go to a small as shit school, a school where its not unheard of to know basically everyone in your grade, and for goodness sakes we're artists. all that kid was saying to me that i heard was 'i am too cheap to support my own desires, so im going to take advantage of other people who will, and just dont feel like lugging their crap everywhere'. ive already had someone steal my drawing pad from the painting labs, and its just lame. im not necessarily saying leave your car unlocked, your harddrive in the labs and your ipod in an empty room, but geezus, supplies?!? its up to us as the student body to create an envrioment that everyone feels comfortable in. ahh well, i doubt we'll see a change, but it was enough to tick me off.

and now, back to painting!
POSTED BY Lex Evans AT 5:04 PM