image heavy post, because i finally brought my camera reader upstairs. the following two pieces were for my painting class; the rabbit painting had a little more work done to it, but because i have other things that take priority it wasnt really enough, and i got eaten in class. nothing like having a fine artist tell you your work sucks, then moves on to some spackle and red paint smeared all over the canvas. le sigh. 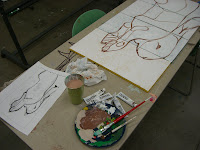 painting that could definately have been better, but eh. yesterday i was feeling a little apprehensive about going into class with shitty work after like three weeks of time to work on it, so i stayed up all ngith reconstructing my concept into roadkill pillows! 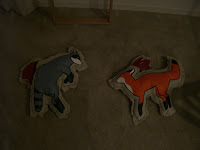 since there was supposed to be 4 paintings done for today, i was going to do 4 of these animals, but from about 2am until 11 am i only got these two done. and what kind of feedback did i get, despite the fact that i did these to make up for my shitty paintings? noootthhinnngg. except my lines werent perfect enough and that i wasnt 'respecting the paint'. well, no, i dont, because i hate painting but im stuck in this class unless i want 5 classes next semester!!!! i cant believe the teacher is so lame as to not pick up on that. and ontop of it all, its a friggin fine arts class.

anyways, even though the class gave me lukewarm responses, all the gics i met as i walked to class/in class loved them, so im chalking it up to fine arts retardedness. no offense to friends of mine who are fine artists, but i hate being smushed into your major plz.

and i found this on my camera, i thought it would be cool for people to post their 'workplaces', studio, computer, corner, whatever..its kind of interesting to visualize where the magic happens!